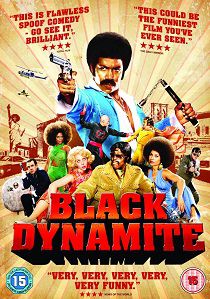 Black Dynamite is the baddest cat to ever hit town, he puts his finger in the ground and turns the whole world around. This ex-CIA commando rules the streets with a 44-Magnum in one hand and nunchucks in the other. With his soul brother band of Kung Fu, he strikes fear into the hearts of suckers and chumps on both sides of the law and with his super cool style, keeps the ladies begging for more.

When "The Man" murders his brother, pumps heroin into local orphanages, and floods the ghetto with malt liquor adulterated to weaken the Black Man's most fundamental power source, Black Dynamite is the only hero willing to fight all the way from the blood-soaked city streets to the hallowed halls of the Honky House.

Black Dynamite runs to a super-fly soul and 70's wah-wah soundtrack and also features some cool-as-ice animated sequences throughout the film. Special features include deleted and alternative scenes, 'The 70's Back in Action' featurette, interviews with cast and director along with much more.

So, say goodbye to the January blues and get yourself some ass-kicking comedy-relief. Dig out your flares, medallions, collars and nunchucks (if you have them) and get ready for the ultimate bad-ass action flick.