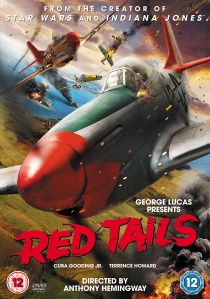 Momentum Pictures takes to the skies in the action-packed aerial adventure Red Tails, from George Lucas the creator of Star Wars and Indiana Jones, released on Blu-Ray, DVD and to download from 29th October 2012.

Inspired by true events, Red Tails is an awe-inspiring tale of overcoming challenges and fighting for what is right. Director Anthony Hemmingway (The Wire, True Blood), skillfully executes this thrilling and thought provoking film about the Tuskegee Airman to target our sympathy, pride and championing of the underdogs.

A brave group of African American Men, who beat the odds in the Tuskegee training program, are sent into combat in Italy. Supplied with out-dated, worn out aircrafts, doubted by the white military bureaucracy and given seemingly meaningless missions, the group of African American fighter pilots overcome their odds and continually impress the high ranking white military with their astounding record. The Tuskegee airmen are finally tasked with the esteemed mission escorting the first American bombers to attack Berlin. As the men continually astonish and exceed the bureaucrat's expectations, they begin gaining more respect among the USAAF, are awarded with new red tail painted aircrafts, as well as worthy missions.

UHD
In Disney's Mulan, released on DVD, Blu-ray and 4K UHD 10th November 2020, a fearless young woman risks everything out of love for her family and her country to become one of the greatest warriors China has ever known. END_OF_DOCUMENT_TOKEN_TO_BE_REPLACED
Top PicksView