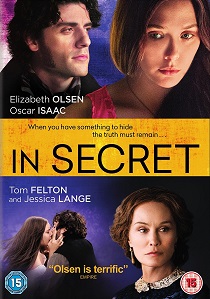 The film is written and directed by Charlie Stratton (TV's Revenge). Co-starring in the film is Shirley Henderson (Trainspotting), John Kavanagh (HBO's The Tudors), Mackenzie Crook (Pirates of the Caribbean series) and Matt Lucas (Bridesmaids).

A romantic thriller set in the lower depths of 1860s Paris, In Secret is a tale of obsessive love, adultery and revenge based on Emile Zola's scandalous novel, Therese Raquin. Therese (Olsen), a sexually repressed beautiful young woman, is trapped into a loveless marriage to her sickly cousin, Camille (Felton), by her domineering aunt, Madame Raquin (Lange). Therese spends her days confined behind the counter of a small shop and her evenings watching Madame play dominos with an eclectic group. After she meets her husband's alluring friend, Laurent (Isaac), she embarks on an illicit affair that leads to tragic consequences.