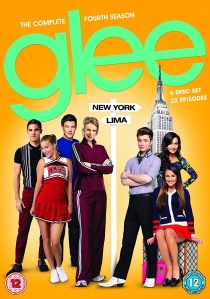 It's time to meet a new generation of students as life at McKinley High continues when Glee: Season 4 comes to Blu-ray and DVD on 7th October 2013 from Twentieth Century Fox Home Entertainment.

With many of the former Glee Club members now graduates, the hunt is on at William McKinley High School to find talented singers to rebuild the New Directions. It's not goodbye to the graduates however as beloved characters Rachel and Kurt move to New York to continue their education at the New York Academy of the Dramatic Arts (NYADA), struggling to adjust to life after high school. So Glee: Season 4 still features all of your favourite characters, but also introduces great new additions to all the laughs, tears and fun-filled antics in a season that features numerous episodes that will leave you desperate for more.

Like the memorable seasons before it, Glee continues to attract big names, with starring roles from Kate Hudson as a nasty NYADA dance teacher, to Sarah Jessica Parker and Whoopi Goldberg (reprising her role as NYADA Dean Carmen Tibideaux). As well as this, the popular show's trademark tribute episodes entertain more than ever, with this season featuring episodes dedicated to the music of Britney Spears, Grease and Stevie Wonder.

Glee Season 4 also sees the introduction of latest Glee Project winner Blake Jenner who joins the cast as Ryder Lynn, a football-playing sophomore who Finn encourages to audition for the upcoming school production of Grease.

So don't miss your own chance to sign up this autumn as Glee: Season 4 arrives on Blu-ray and DVD on 7th October 2013 from Twentieth Century Fox.