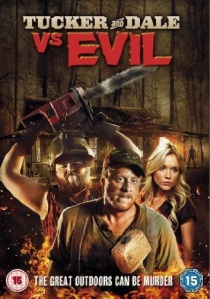 Tucker and Dale Vs Evil is a hilariously gory, good-spirited horror comedy, doing for killer rednecks what Shaun of the Dead did for zombies. The film will launch as part of Film 4 FrightFest in London's Leicester Square on August 26. Film 4 FrightFest is the UK's premier horror festival, described by Guillermo del Toro as "The Woodstock of Gore".

Tucker (Tudyk) and Dale (Labine) are two good natured, best friends on holiday at their dilapidated mountain cabin. While there, they are mistaken for murderous backwoods rednecks by a group of obnoxious, preppy college kids who are camping in the same woods.

When Tucker and Dale save the life of gorgeous student Allison (Bowden) her friends believe she has been kidnapped and set out to rescue her. As the chain of hilarious misunderstandings grows, so does the body count.

DVD
In The Undoing, released on DVD and Blu-ray 22nd March 2021 from Warner Home Video, a chasm opens up in the seemingly perfect life of a successful therapist: a violent death, a missing spouse, and a ... END_OF_DOCUMENT_TOKEN_TO_BE_REPLACED
Top PicksView