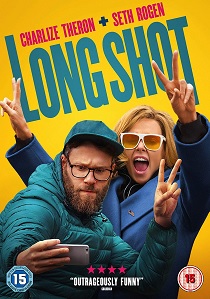 Fred Flarsky (Seth Rogen) is a gifted and free-spirited journalist with an affinity for trouble. Charlotte Field (Charlize Theron) is one of the most influential women in the world. Smart, sophisticated, and accomplished, she's a powerhouse diplomat with a talent for...well, mostly everything. The two have nothing in common, except that she was his babysitter and childhood crush.

When Fred unexpectedly reconnects with Charlotte, he charms her with his self-deprecating humour and his memories of her youthful idealism. As she prepares to make a run for the Presidency, Charlotte impulsively hires Fred as her speechwriter, much to the dismay of her trusted advisors. A fish out of water on Charlotte's elite team, Fred is unprepared for her glamourous lifestyle in the limelight.

However, sparks fly as their unmistakable chemistry leads to a round-the-world romance and a series of unexpected and dangerous incidents.

Related Articles
Sausage Party, Disaster Artist, Sausage Party, Bad Neighbours 2, Kung Fu Panda 3, The Night Before, Steve Jobs, The Interview, Bad Neighbours, This Is The End, The Guilt Trip, Take This Waltz, 50/50, Kung Fu Panda 2, The Green Hornet, Funny People, Zack and Miri Make a Porno, Pineapple Express, Horton Hears a Who!, Superbad, Knocked Up, Knocked Up, The Lion King, An American Pickle
Rise Of The Planet Of The Apes, Star Wars: The Last Jedi, War for the Planet of the Apes, Dawn of the Planet of the Apes, The Adventures Of Tintin: Secret Of The Unicorn, Rise Of The Planet Of The Apes, Animals United 3D, Sex & Drugs & Rock & Roll, The Cottage, Sugarhouse, Flushed Away, The Jolly Boys Last Stand, King Kong, The Hobbit Trilogy
Prometheus, Atomic Blonde, Fast & Furious 8, Kubo And The Two Strings, The Huntsman: Winter's War, Dark Places, Mad Max: Fury Road, A Million Ways to Die in the West, Badults, Snow White & The Huntsman, Young Adult, Astro Boy, Hancock, Tully, Gringo, 2 Days in the Valley, The Devils Advocate, Reindeer Games, The Addams Family, Bombshell, Bombshell
Snatched, The Night Before, Warm Bodies, 50/50, How To Make It In America: Season 1, All The Boys Love Mandy Lane
Grace And Frankie: Season 1, Unfinished Business, Girl Most Likely
Comments
BD Releases News Pick

BD
Bursting with indelible characters, quotable dialogue and jaw-dropping special effects, Tremors is back and bigger than ever in this 4K-restored and fully loaded collectors\' edition, available on 4K ... END_OF_DOCUMENT_TOKEN_TO_BE_REPLACED
Hot PicksView

UHDBoxset
23/11/2020
Now more stunning than ever before, return to the stunning locations and epic adventures in Peter Jackson's Middle-earth in The Lord of the Rings Trilogy, arriving on stunning 4K UHD 30th November ...

DVDTVBoxset
05/11/2020
Beloved classic All Creatures Great and Small - based on the life and times of veterinary surgeon and writer James Herriot - gets a brand spanking new remake with all the charm of the original, ...

Starring #RichardMadden #KeeleyHawes, why not settle down & binge watch on a #Tuesday with #Bodyguard available on…