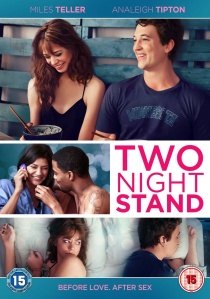 BAFTA Award-Nominee, Miles Teller (Divergent, Whiplash) and Analeigh Tipton (Lucy, Crazy Stupid Love) team up in what is being hailed as the romantic comedy of the digital age.

Heartbroken by the collapse of her wedding engagement and egged on by her roommate Faiza (Jessica Szohr, TV's Gossip Girl) and her boyfriend Cedric (Scott Mescudi, aka Kid Cudi), Megan (Tipton) boldly propositions Alec (Teller), a cute and funny guy she meets online, for her first ever one-night stand.

However when a paralysing blizzard hits the city trapping them in Alec s cramped Brooklyn apartment she is sheepishly forced to take shelter with an equally mortified Alec. Forced to spend another day and night together, Megan and Alec decide that they have the opportunity for a hands-on learning experience that inevitably leads them to a very adult snow day.

BD
Ryan Reynolds stars in this action-packed comedy as a bank teller who discovers he is actually a background player in an open world video game in Free Guy, arriving on DVD, Blu-ray and 4K UHD 4th ... END_OF_DOCUMENT_TOKEN_TO_BE_REPLACED
Top PicksView