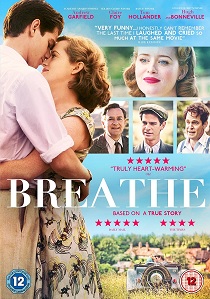 Marking the directorial debut of Andy Serkis (War For The Planet of the Apes), Breathe arrives on digital download on 19th February 2018, and on Blu-ray and DVD on 26th February 2018, courtesy of STXinternational, a division of STX Entertainment, and Sony Pictures Home Entertainment. Based on the true story of producer Jonathan Cavendish's own parents, Breathe is an inspirational and highly emotional celebration of bravery and human possibility, a love story about living every breath as though it's your last.

Adventurous and charismatic, Robin Cavendish (Garfield) has his whole life ahead of him when he is paralysed by polio whilst in Africa in 1958. Contrary to all advice, Robin's wife Diana (Claire Foy) brings him home from hospital where her devotion and witty determination transcends his disability. Together they refuse to be imprisoned by his suffering, dazzling others with their humour, courage and lust for life.

Andrew Garfield and Claire Foy star in this warm, funny and uplifting true story. Breathe follows the life of Robin Cavendish (Garfield) and his wife Diana (Foy), an adventurous and determined couple who refuse to give up when Robin contracts polio and is given just months to live.

Against all advice, Diana brings him home from hospital where her devotion and witty determination transcends his disability. Together and with the help of Diana's hilarious twin brothers, both played by Tom Hollander (The Night Manager), and the pioneering ideas of their friend and inventor Teddy Hall, (Hugh Bonneville, Paddington, Downton Abbey) they find a way to live a full and passionate life. 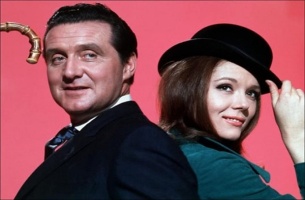 HotDVDTV
It's time to celebrate 50 years of a show that defined 1960s television as The Avengers: The Complete Series 5 is high-kicking onto DVD from 25th October 2010, courtesy of Optimum Home Entertainment. END_OF_DOCUMENT_TOKEN_TO_BE_REPLACED
Comments
BD Releases News Pick

BD
Experience the thriller influenced by the astounding real-life story of the Gucci family and their unexpected legacy in House Of Gucci, available on Blu-ray and DVD 21st February 2022 from Universal Pictures (UK). END_OF_DOCUMENT_TOKEN_TO_BE_REPLACED
Top PicksView