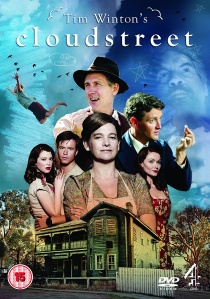 NewsDrama
News Article Go back to homepage
Set in and around Perth during the 1940 sand 1950s, Cloudstreet, released on DVD on 27th February 2012 from 4DVD, tells the story of two rural families, the Lambs and the Pickles, who suffer separate catastrophes and flee to the city to pick up the pieces of their lives and start afresh.
David Bowers, Helen Doig, Essie Davis, Stephen Curry, Geoff Morrell, Kerry Fox
Matthew Saville
Greg Haddrick, Sean Hepburn Ferrer, Della Churchill, Bob Campbell
4DVD
Unknown
27/02/2012
Thank you for supporting DVD365.net when you order using the link(s) below. As an Amazon Associate we earn from qualifying purchases
Buy DVD
Information

Set in and around Perth during the 1940 sand 1950s, Cloudstreet tells the story of two rural families, the Lambs and the Pickles, who suffer separate catastrophes and flee to the city to pick up the pieces of their lives and start afresh. Brought together in the same house at No.1 Cloud Street, the families share numerous tragedies and triumphs that draw them closer together, until the roof over their heads becomes a home for their hearts. Cloudstreet is released on DVD on 27th February 2012 from 4DVD.

Grand in scale and expertly realised, Cloudstreet captures the collective dramas of these plucky families with the same intensity as Winton's much-revered book. Directed by Matthew Saville (We Can Be Heroes), this adaptation of Cloudstreet was written by Tim Winton and Ellen Fontana; and produced by Greg Haddrick and Brenda Pam.

Presented for the first time on DVD, and including a host of exclusive special features, Cloudstreet offers a beautiful portrayal of two very different families who overcome adversity to find common ground...