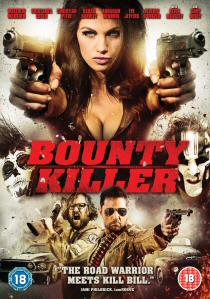 A bloodbath of explosive action and more than a mere splattering of kills.. and that's just from the leading lady! Straight from the pages of a graphic novel, Christian Pitre is set to rocket to pin up status with her breakout role as the Bounty Killer, released on DVD and Blu-ray on 27th January 2014, courtesy of Anchor Bay Entertainment.

Since the greed-fueled corporations were destroyed 20 years ago, the world has been governed by The Council of Nine; a group of determined individuals, set on bringing new law and order for humankind into this post-apocalyptic wasteland. Their weapons against the uprisings of the white-collar criminals? The Bounty Killers.

Bounty Killers are celebrated by the people; revered pillars of the community and many such as Drifter and Mary Death have reached cult status. With the threat of a large corporation, Second Sun, gaining momentum, Drifter, Mary Death and Jack, the greatest gun caddy ever, join forces to restore peace and justice to the world.

But will Drifter's past jeopardise their path to justice?

DVD
The globally renowned Len Deighton novel The Ipcress File, the first in the Harry Palmer series, has been adapted into a six-part series and is released on DVD 18th April 2022 from ITV Studios Home Entertainment. END_OF_DOCUMENT_TOKEN_TO_BE_REPLACED
Top PicksView