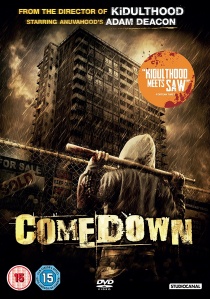 Fresh out of prison and back on the streets of London, Lloyd is determined to stay on the straight and narrow for the sake of his girlfriend, Jemma and unborn child.

However, the lure of some fast cash proves too much to resist, so Lloyd and five childhood friends take on the seemingly easy job of rigging up a pirate radio station aerial at the top of a deserted tower block.

Reaching the top and settling down, much to the disappointment of Lloyd, it is clear his friends want a party. Things soon get out of control and when pregnant Jemma goes missing, the group starts to fear that they are not alone. Searching the dark interiors of the abandoned building, they are slowly picked off one by one, each death more gruesome and savage than the last.

Realising they have been trapped by the resident psychopath, who is quietly hunting them from the shadows and bent on revenge, it becomes a race against time to escape from the booby trapped tower block.

Packed with suspense and grisly deaths, Comedown will have you on the edge of your seat from start to finish.