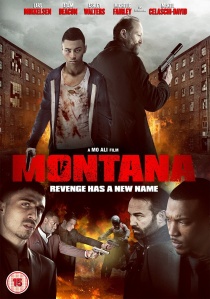 On the mean streets of London's East End, fourteen-year old Montana (McKell David - My Brother the Devil, Black Mirror) discovers that the powerful crime lord and ruthless lieutenants for whom he works secretly killed his father. At the same time Dimitrije (Lars Mikkelsen - The Killing, Borgen, Headhunter), a former Serbian commando, comes looking for the gangster in order to take revenge for the death of his wife and son. Realising that they share a bloody purpose, Dimitrije now mentors Montana in the dark arts of assassination and relearns the value of life as he teaches the boy the true meaning of friendship, honour and respect.

A thrilling and gritty revenge tale, Montana also stars Adam Deacon (Kidulthood, Adulthood), Ashley Walters (Anuvahood, Top Boy) and Michelle Fairley (Game of Thrones, Philomena). It is directed by Mo Ali (Shank) and produced by Mark Foligno (The Moon, The Kings Speech, The Rise) and will be in selected cinemas during December and available on DVD from 29th December 2014 courtesy of Entertainment One.

BD
After moving to a new town, two brothers discover that the area is a haven for vampires as the classic The Lost Boys is released on 4K UHD 20th September 2022 from Warner Home Video. END_OF_DOCUMENT_TOKEN_TO_BE_REPLACED
Top PicksView