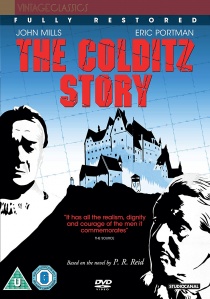 Restored in celebration of the 70th Anniversary of the original escape, starring John Mills, Christopher Rhodes, Lionel Jeffries, Bryan Forbes, Ian Carmichael and Eric Portman, The Colditz Story is released on DVD and Blu-Ray on 10th December 2012 courtesy of StudioCanal.

On 14/15 October 70 years ago, Pat Reid, along with four other fellow British Officers, escaped from the notorious German POW camp, Colditz Castle and made his way to freedom via Switzerland. His subsequent 1952 novel about his time in the camp and his escape became a bestseller and this classic film The Colditz Story - forever ensuring the castle's place in history.

Colditz Castle was used by the Nazis to house the most high - risk prisoners - VIPs and those who had already made repeated escape attempts from other camps. The Germans foolishly believed that Colditz' position on a rocky outcrop high above a river made it inescapable.

Unfortunately this boast was merely seen as an extra challenge to its plucky inmates and the castle in fact was subject to more frequent escape attempts - with some success - than almost anywhere else. The various attempts made by inmates included dressing as a Hitler Youth, hiding under the bread delivery van, dressing as a woman, hiding in a mattress and of course the regulation tunnel digging efforts - including through snow on the canteen roof, or through a hole under the dentist's chair. Escapes were made on an almost daily basis and not just Reid's was a success.

The Colditz Story is the ultimate POW escape adventure, based on Reid's novel and originally released in 1955 to great critical and commercial success. Featuring an all-star cast including John Mills (Ice Cold in Alex, Scott of the Antarctic), Lionel Jeffries (Chitty Chitty Bang Bang), Bryan Forbes (writer: I Was Monty's Double, The Angry Silence, Whistle down the Wind) and Eric Portman (The 49th Parallel) and directed Guy Hamilton (Goldfinger, The Man with the Golden Gun), The Colditz Story celebrates British ingenuity, perseverance and indomitable spirit at its finest.

The Colditz Story restoration was completed at Pinewood Studios in high definition using the best original film materials available. After rigorous assessment, the best material for restoration was the fine - grain inter - positive which was scanned in 2k resolution. Over 80 hours was spent digitally cleaning the film frame by frame, removing dirt, scratches, warps (which were found on every cut), tears or replacing torn or missing frames and improving stability issues for the digital restoration, ensuring the general look of the film does not stray too far from the original release.

HotUHD
Now more stunning than ever before, return to the stunning locations and epic adventures in Peter Jackson's Middle-earth in The Lord of the Rings Trilogy, arriving on stunning 4K UHD 30th November 2020 from Warner Home Video. END_OF_DOCUMENT_TOKEN_TO_BE_REPLACED
Top PicksView