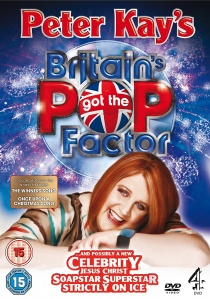 Comedy genius Peter Kay is back with his hilarious reality TV parody Peter Kay's Britain's Got the Pop Factor and Possibly a New Celebrity Jesus Christ Soapstar Superstar Strictly on Ice, available to own on DVD on 28th September 2009 courtesy of 4DVD.

This was Peter Kay's first original show for over four years, and pulled in a massive 7.1 million viewers making it one of Channel 4's highest rated shows of all time. Winner of Best Comedy Performance' at the RTS Awards describing it as "brilliantly visually realised, and a perfect parody of the genre" the series also received 'Best British Comedy Television Programme' award from BAFTA/LA and the 'Best Music / Variety Program' at the Banff World Television awards.

Written by and starring Peter Kay, his latest talent-show spoof centres on Geraldine McQueen (Kay), who hopes to make the big-time via a reality TV show. As the acts drop out one by one, we learn more about the finalists including a shocking secret that Geraldine was previously a man called Gerry King! Hosted by Cat Deeley, other finalists include R Wayne who is resurrected to perform in the show after his Grandmother dies when she discovers he has been voted out of the show. There's also the half paraplegic finalists 2 Up 2 Down, who have managed to make it to the final despite their hilarious back catalogue of personal tragedies.

In an ironic twist, original talent show judges Nicki Chapman, Pete Waterman and Neil Fox preside over the competition proceedings, casting their expert eyes over the finalists before deciding who has enough pop factor to sing The Winners Song'. In true reflection of reality shows, Kay features a number of celebrity mentors who each offer their musical advice to the contestants including: Paul McCartney, Rick Astley, Ricky Wilson (Kaiser Chefs) and the late Michael Jackson Kay captures the real reasons behind the nation's passion for talent shows by exaggerating all of the highs and lows, plus the best of back-stabbing, bitchiness and emotional stories. Kay affectionately pokes fun at all things reality with the witty tongue-in-cheek banter we've come to expect and love.

The DVD also features the videos of Geraldine McQueen's two chart topping successes written and performed by Peter Kay and the award-winning member of Take That, Gary Barlow Once Upon A Christmas Song and The Winners Song which in rare case of art imitating life actually went on to beat real X-Factor winner Leon Jackson to the top of the singles chart.