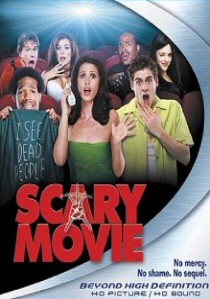 Experience your favourite films in ground-breaking new high-definition technology with revolutionary Blu-ray Disc this autumn. Prepare to be blown away as non-stop action and hilarious comedy meet cutting-edge technology in eye-popping 1080p resolution.

This wickedly funny horror flick will have you bursting at the sides when it makes its high definition debut, spoofing films such as Scream and I Know What You Did Last Summer. With extras including an exclusive Movie Showcase demonstrating the superior visual and audio experience of Blu-ray through a selection of key scenes, as well as a behind-the-scenes featurette, the theatrical trailer and additional scenes, the high-def hilarity is yours to own from 29th October 2007.

The hugely increased capacity of Blu-ray - with up to 50GB on a dual-layer disc - offers ground-breaking interactive bonus material for all your favourite films. Special high definition in-movie Java features, exclusive movie showcases, integrated games to play simultaneously as you watch the main movie, seamless menus and personal bookmarks for favourite scenes all add to the ultimate in home entertainment enjoyment.

The highest definition you have ever seen, the best sound you have ever heard, the richest interactive features you have ever experienced, don't miss this and other electrifying titles now available with the awesome power of Blu-ray Disc.