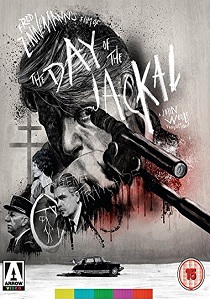 In 1971, Frederick Forsythe shot to bestseller status with his debut novel, The Day of the Jackal taut, utterly plausible, almost documentarian in its realism and attention to detail. Two years later, director Fred Zinnemann (High Noon) turned a gripping novel into a nail-biting cinematic experience.

August 1962: the latest attempt on the life of French President Charles de Gaulle by the far right paramilitary organisation, the OAS, ends in chaos, with its architect-in-chief dead at the hands of a firing squad. Demoralised and on the verge of bankruptcy, the OAS leaders meet in secret to plan their next move. In a last desperate attempt to eliminate de Gaulle, they opt to employ the services of a hired assassin from outside the fold. Enter the Jackal (Edward Fox, Gandhi): charismatic, calculating, cold as ice. As the Jackal closes in on his target, a race against the clock ensues to identify and put a stop to a killer whose identity, whereabouts and modus operandi are completely unknown.

Co-starring a plethora of talent from both sides of the Channel, including Michael Lonsdale (Munich), Derek Jacobi (The Odessa File) and Cyril Cusack (1984) and featuring striking cinematography by Jean Tournier (Moonraker), The Day of the Jackal remains one of the greatest political thrillers of all time.

With a host of extras, The Day of the Jackal is re-released in a high definition blu-ray presentation on 4th September 2017 from Arrow Video.

HotUHD
Now more stunning than ever before, return to the stunning locations and epic adventures in Peter Jackson's Middle-earth in The Lord of the Rings Trilogy, arriving on stunning 4K UHD 30th November 2020 from Warner Home Video. END_OF_DOCUMENT_TOKEN_TO_BE_REPLACED
Hot PicksView

DVD
19/11/2020
Trial by Fire, released on DVD 7th December 2020 from Dazzler Media, is the true-life Texas story of the unlikely bond between an imprisoned death row inmate and a mother of two from Houston who, ...