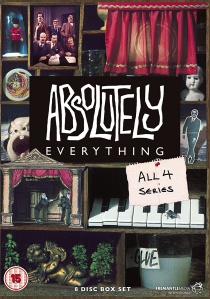 NewsTV SeriesComedyBoxset
News Article Go back to homepage
Back in the Dark Ages of Television, Channel 4 managed to get its hands on a comedy sketch show so brilliantly funny and original they selfishly endeavoured to keep it to themselves by burying it in the mid-week, post-pub schedules. That show was Absolutely, due to be released on DVD by Fremantle Home Entertainment on 5th May 2008.
Peter Baikie, Morwenna Banks, Jack Docherty, Moray Hunter, Gordon Kennedy
Unknown
14 hours 40 minutes
05/05/2008
Thank you for supporting DVD365.net when you order using the link(s) below. As an Amazon Associate we earn from qualifying purchases
Buy DVD
Information

Back in the Dark Ages of Television, Channel 4 managed to get its hands on a comedy sketch show so brilliantly funny and original they selfishly endeavoured to keep it to themselves by burying it in the mid-week, post-pub schedules. Fortunately, a horde of a comedy fans (including the likes of Ian Hislop, Jo Brand, Paul Whitehouse and David Baddiel) and millions of other viewers managed to catch this hidden jewel and bestowed upon it the cult comedy status it so richly deserved.

That show was Absolutely, due to be released on DVD by Fremantle Home Entertainment on 5th May 2008, starring Pete Baikie, Morwenna Banks, Jack Docherty, Moray Hunter, Gordon Kennedy and John Sparkes. Now, the "hugely underrated" (Ian Hislop) and "influential" (Paul Whitehouse) Absolutely is finally coming to DVD in the form of Absolutely: Everything!, an eight-disc boxed set that includes every episode from every series of the show, along with unmissable Extras (all of which have been produced by the cast especially for this release) such as never before seen footage of early work by the cast, audio commentaries and interviews with the cast, producers and many of the show's famous fans.

Absolutely ran for four series, with a total of 28 episodes, between 1989 and 1993 on Channel 4 and introduced a nation of unsuspecting viewers to a collection of comical characters such as Bert Bastard, the Nice Family, Calum Gilhooley and his omnipresent blue anorak and plastic carrier bag, the extremely anti-English Scotsman Mac McGlashan, and Jo Brand's two personal favourite characters, Little Girl and Frank Hovis (usually seen reporting on his life from the seat of a filthy public toilet).

For many fans, though, the show's most memorable moments featured the eccentric councillors of a certain local village - Stoneybridge! In fact, the Stoneybridge Olympic Bid sketch was voted as Number 30 in Channel 4's Top Fifty Comedy Sketches, making it officially funnier than both Monty Python's "Nudge Nudge" sketch and "The Lumberjack Song". Among the show's other accolades are nominations for a Writer's Guild Award, the Golden Rose of Montreaux and three British Comedy Awards, including two nominations for Morwenna Banks as Best Comedy Actress.

Affectionately described by celebrity fan Jo Brand as "a lot of emotionally disturbed people gathered together in one space", and by Time Out magazine as "silly and compelling", Absolutely: Everything! presents the perfect opportunity for nostalgic comedy fans to relive one of comedy television's best kept secrets and for those who missed out the first time around to discover one of the medium's truly innovative and most memorable sketch shows.