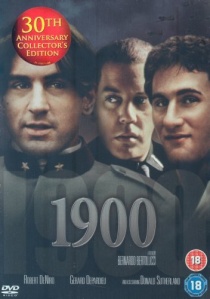 Boasting a stellar cast of A-list actors including Robert De Niro, Gérard Depardieu and Donald Sutherland, 1900 is released to buy for the first time on DVD from 30th April 2007 as a two disc five hour collectors edition DVD box-set.

Spanning the 45 years from the death of Verdi to the rise of Mussolini, 1900 documents the lives of two Italian boys born into two very different families. Alfredo is born to a rich landowner who owns a vast farm and treats his servant's poorly, paying minimum wages and enjoying the fruits of their labour. Olmo is the charming son of a peasant, raised by his grandfather and living on Alfredo's father's land.

Unaware of the magnitude of their differences, the boys overcome the obstacles of class and grow up together creating a strong bond as playmates. They spend long days roaming Alfredo's farm, catching frogs and playing on the train tracks that surround the area. Eventually when both fathers die, the young men take on the responsibilities, politics and ideals that surround their individual families. Alfredo (De Niro, Raging Bull, Taxi, Casino) has grown into an indulgent coward who despises the fascist uprising particularly represented in his violent and murderous foreman (Sutherland, Klute, The Dirty Dozen).

In contrast, Olmo (Depardieu, Cyrano de Bergerac) is a natural leader who returns from war with strong political views. He sees communism as the future for Italy which positions him as a threat to the black shirt fascists that are rapidly gaining power in the surrounding regions.

The two men remain friends throughout their early years, but their ideals and actions eventually pull them apart. Alfredo becomes increasingly jealous and resentful of Olmo's courage, morality and ethics, qualities which he does not process himself. As Mussolini amasses power, Italy is plunged into alliance with the Nazi's during World War II, putting their friendship to the ultimate test.

With beautiful cinematography and outstanding performances from a young yet talented cast, 1900 is an epic masterpiece for all film lovers!

BD
Bursting with indelible characters, quotable dialogue and jaw-dropping special effects, Tremors is back and bigger than ever in this 4K-restored and fully loaded collectors' edition, available on 4K ... END_OF_DOCUMENT_TOKEN_TO_BE_REPLACED
Hot PicksView