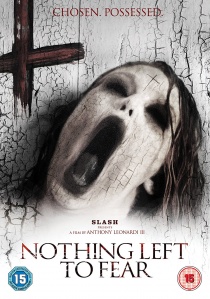 Nothing Left To Fear, released on DVD and Blu-ray on 17th February 2014 by Anchor Bay Entertainment, is the disturbing debut horror release from Slasher Film Productions (co-owned by none other than Rock God Slash). Directed by Gore Verbinksi's protégé: the visionary Anthony Leonardi III and starring Clancy Brown and Anne Heche, Nothing Left To Fear has a chilling plot and haunting musical score which will delight horror hounds and rock fans alike.

When Dan Bramford (James Tupper) moves his family to the idyllic town of Stull to take up the mantle as the new pastor, he is greeted with open arms and welcomed with some all-American country charm by his new congregation. With its fair share of secrets, the seemingly sleepy Stull is actually built on a demonic gateway to hell. Every year a ritual human sacrifice must take place to protect the town from the plague of a dark supernatural force.

The Bramfords have a new home, new jobs and a new beginning in Stull; but the town has much more sinister plans in store for them.