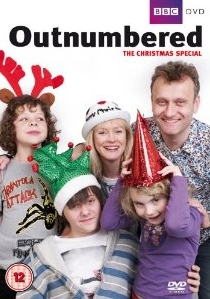 Outnumbered, Andy Hamilton and Guy Jenkin's (creators of Drop the Dead Donkey) BAFTA nominated comedy, puts three young children at the very centre of the story - and allows them to improvise into the bargain. Capturing family life at its most deliciously chaotic, the special festive episode of this comedy gem is released on DVD from 11th January 2010 from 2entertain.

Outnumbered is a very recognisable celebration of parental incompetence, as a beleaguered Mum and Dad attempt to raise their kids with the minimum of emotional damage for all concerned. The series has been praised by critics and viewers alike for its freshness and its very natural evocation of the havoc of family life with small children; a regal seven-year-old with a talent for interrogation, an near-year-old boy who could out-fib Jeffrey Archer, and a thirteen-year-old who's just noticed that adults are hypocrites.

For The Christmas Special we join the Brockman family on Boxing Day and Santa has paid a visit, along with some burglars. While Mum and Dad try to maintain some festive spirit, Ben wreaks havoc with a mechanical hand, Jake argues the case for pirated music and Karen is busy writing New Year's resolutions - not for herself, but for the rest of the family.and Barack Obama.

With guests arriving, some welcome, some not, the pressure is on Dad to get lunch on the table. But where's Grandad?