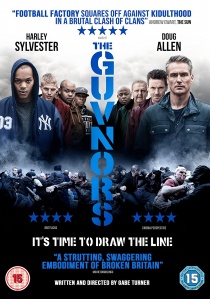 Rizzle Kicks star Harley Sylvester makes his feature film debut, alongside a host of top British acting talent in hard-hitting, stylish thriller The Guvnors. Directed by Gabe Turner (In the Hands of The Gods, The Class of '92), it's produced by Fulwell 73 Productions and co-produced by author and bona fide football firm insider Cass Pennant, the film comes to DVD and Blu-ray on 29th December 2014 courtesy of Metrodome Distribution.

It's dog eat dog on a South East London Estate, gangs rule with fear and intimidation and gang leader Adam (Sylvester) will stop at nothing to earn respect and prove he runs things.

Mitch (Doug Allen - The Firm, Gangster No.1) has left behind his tough estate upbringing and violent past as leader of a notorious football firm The Guvnors. Now living in the suburbs, he's the doyen of respectability and quiet confidence, until young upstart Adam attempts to drag him back in, desperate to inherit Mitch's reputation and vanquish his legend.

Two generations steeped in violence collide and the two men are forced to reconcile their past and face the future as secrets are revealed, blood is spilt and lives are shattered.

Turner's violent thriller explores the sinister, inescapable legacy of a life of violence in all its forms.