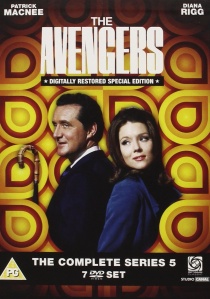 It's time to celebrate 50 years of a show that defined 1960s television as The Avengers: The Complete Series 5 is high-kicking onto DVD from 25th October 2010, courtesy of Optimum Home Entertainment.

As the fifth series of the definitive spy-fi series The Avengers hit screens in 1966 in the UK and 1967 in the US, John Steed (Patrick Macnee) and Emma Peel (Diana Rigg) were called to duty for some challenging missions. This series was also the first to be filmed in colour, three whole years before ITV began full colour broadcasting.

Series 5 also tackles more futuristic storylines of an increasingly sci-fi bent. For example, key highlight episodes from this series include Mission...Highly Improbable as the duo deal with being shrunk to doll size, The Hidden Tiger as pet cats are electrically altered into ferocious and lethal miniature tigers, Return of the Cypernauts as Patrick and Mrs. Peel fight off killer automata, mind transferring machines in Who's Who??? and invisible foes in The See-Through Man.

The Avengers was the longest running espionage series produced for English-language television and reached audiences in 120 countries, a record that still stands to this day! The Avengers: The Complete Series 5 is out on DVD on 25th October and features the first full restoration of all episodes. It's time to relish in the full-coloured expanded wardrobes, lavish sets, top notch scriptwriting and stories that benefit from the combined input of writers, directors and actors all at their peak.

The Avengers: Series 1, 2, 3 and 4 are also currently available to buy on DVD from Optimum Home Entertainment. The Avengers: A Celebration is a glorious visual tribute to mark the 50th anniversary of the show and is available from 29th October from Titan Books.

UHD
From the Wachowski brothers and Joel Silver, the masterminds behind The Matrix trilogy, comes another intriguing, action-packed fantasy-thriller in V for Vendetta, released on 4K UHD 2nd November 2020 from Warner Home Video. END_OF_DOCUMENT_TOKEN_TO_BE_REPLACED
Top PicksView