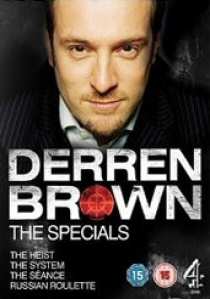 Controversial, award-winning psychological illusionist Derren Brown uses his unique fusion of magic, suggestion, psychology, misdirection and showmanship to push the boundaries of magic to new heights in a collection of his best one-off shows in The Specials boxset released by 4DVD on 3rd November 2008.

Featuring four of Derren's most well-known shows to date: Russian Roulette Live, The Heist, Séance, and The System, the DVD boxset also includes a fantastic range of special features such as behind the scenes footage, making-of documentaries and more. In a class of his own -- both on stage and television -- Derren intoxicates audiences with his unique brand of intelligent and theatrical entertainment and The Specials does not disappoint.

In Russian Roulette Live Derren performs one his most dangerous feats yet. Filmed in a secret location a member of the public, chosen from a nationwide search, loads a real handgun with a single bullet and hands it back to him. Using his famous ability to read people, Derren is then able to determine which chamber contains the bullet by putting the gun to his head and pulling the trigger until he comes to the live chamber -- but what powers will he use to dodge the bullet? Will his mind control techniques be sharp enough to spare him the deadly chamber?

The Heist sees Derren give a masterclass in persuasion as he explores how little it takes for the human mind to cross into deviant behaviour. Assuming the guise of a motivational speaker, Derren attempts to convince a group of responsible, middle-management businessmen and women to steal £100, 000 from a bank in an armed robbery -- but will he succeed?

In The Séance twelve volunteers use traditional methods -- ranging from automatic writing to The Spirit Cabinet to the Ouija Board -- as Derren guides them through the various stages of conducting a séance. Using his trademark skills and showmanship Derren challenges some of the most prevalent myths of spiritualism and tests how effective a séance can be with a modern audience.

Finally, the established Master of Mind Control develops a guaranteed method of winning at the horses in The System. Not only that but he explains how he does it to his audience enabling them to test it for themselves. Derren takes a random member of the public and sends her predictions twenty four hours before a series of races.

The participant sees The System work time and time again, and therefore begins to place larger bets -- as she wins every time -- until finally she scrapes together every last penny she has to risk it all on one final race. Can there really be a perfect system for winning at the races?

With plenty of audience participation, shocking stunts and subliminal mind-games, The Specials demonstrate why Derren is one of the country's most exciting live performers.