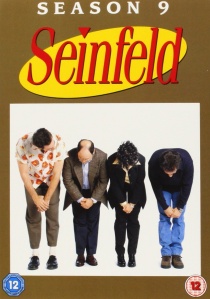 As Seinfeld fans ready themselves for the release of the ninth and final season, as well as Seinfeld: The Complete Series 1 to 9 Box Set, of the Emmy and Golden Globe winning sitcom on DVD this 19th November 2007, they've voted for their favourite episodes ever in an online poll.

The most popular episode among fans, with a massive 45 per cent of the vote, was season seven's uproarious The Soup Nazi, based on the real-life culinary authoritarianism of New York soup chef Al Yeganeh and the strict ordering procedure in his legendary soup store - order properly or its no soup for you!.

This was followed by season four's The Bubble Boy, in which George (Jason Alexander) has a fraught game of Trivial Pursuit, and came second in the online poll with 26 per cent of the vote.

George again takes centre stage in The Opposite from season five which, with 11 per cent of the vote, came third. The Chicken Roaster, comes in a very close fourth place with 10 per cent of the vote while the remaining eight per cent went to The Library putting it at fifth place.

Created by stand-up comedian Jerry Seinfeld and writer Larry David (Curb Your Enthusiasm), the show ran to 180 episodes over its nine-year life and is regarded by many as one of the best, if not the best, comedy series ever. As well as starring Seinfeld in the title role, the regular cast included Julia Louis Dreyfus, Michael Richards and Jason Alexander, while Larry David often appeared as an uncredited voice.

Also released is Seinfeld The Complete Series - 1 to 9 Box Set - a must have for all fans. This Limited Edition release contains the complete Seinfeld TV series on 32 discs, plus an additional exclusive bonus disc featuring an hour-long roundtable with the 4 key cast members and Larry David, and also includes a sumptuous 226 page coffee table book, created by the cast and crew, chronicling the show.