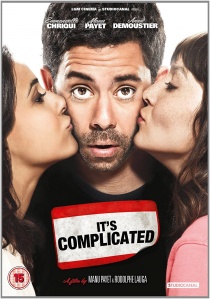 NewsComedyWorld Cinema
News Article Go back to homepage
In It's Complicated, released on DVD by StudioCanal on 13th October 2014, Ben is about to marry Juliette. But his life is turned on its head when the high-school sex bomb who never gave him a second glance returns to Paris - and he's the only person she knows...
Emmanuelle Chriqui, Manu Payet, Anais Demoustier
Manu Payet, Rodolphe Lauga
StudioCanal
1 hour 38 minutes
13/10/2014
#ItsComplicated
Thank you for supporting DVD365.net when you order using the link(s) below. As an Amazon Associate we earn from qualifying purchases
Buy DVD
Information

Ben (Manu Payet: Boule & Bill), a 30-year-old loser, is about to marry Juliette (Anais Demoustier: Therese Desqueyroux). But his quiet little life will be turned on its head when he runs into the person whom he secretly wanted to see more than anyone: Vanessa (Emmanuelle Chriqui: Entourage), the high-school sex bomb who never gave him a second glance. She's back in Paris now, and he's the only person she knows...

It's Complicated (Situation amoureuse : c'est compliqué) is released on DVD by StudioCanal on 13th October 2014.