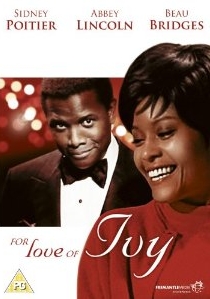 Following an Oscar winning performance in 1963's Lilies Of The Field and 1967's triple whammy of smash-hit movies (Guess Who's Coming To Dinner, In The Heat Of The Night and To Sir, With Love) that had made him the world's biggest box office draw at the time, Sidney Poitier, at the peak of his success, next chose to star in the romantic comedy, For Love Of Ivy, coming to DVD on 15th September 2008 from Fremantle Home Entertainment.

Based on an original story by Poitier, directed by Daniel Mann (Willard; Our Man Flint; Butterfield 8; The Teahouse Of The August Moon) and with music by Quincy Jones, the film co-stars Abbey Lincoln (Mo' Better Blues), Beau Bridges (My Name Is Earl) and multiple Emmy Award winner Carroll O'Connor (In The Heat Of The Night; All In The Family).

Ivy (Lincoln) works as the live-in maid and housekeeper for the Austin family -- father Frank (O'Connor), mother Doris (Nan Martin), son Tim (Beau Bridges) and daughter Gena (Lauri Peters) -- the wealthy owners of a large, downtown department store. When Ivy informs the family that she intends to terminate her employment in order to move to the city to study for a new career, the teenage kids decide to find her a man in the hope that a romance will prevent her from leaving them... and Tim thinks he knows the perfect candidate for the job.

Successful businessman Jack Parks (Poitier) runs a legitimate trucking firm by day but at night makes an extra buck by turning one of his rigs into an illegal, roving gambling den. When Jack proves reluctant to their suggestion that he date Ivy, Tim and Gena blackmail him into asking her out. Of course, Ivy is completely unaware of the scheming going on behind her back and is immediately smitten by Jack on her first meeting with him, choreographed to anything but perfection by the hapless teens. Worse, Jack really isn't looking to get involved with anybody.

A charming rom-com delightfully played by Abbey Lincoln and featuring the ever-watchable Sidney Poitier at his charismatic best, For Love Of Ivy also serves as an amusing snapshot of 1960s fashions and American middle-class mores.

UHD
Pixar Animation Studios serves up a breakthrough comedy with something for everyone as Ratatouille arrives for the first time on 4K Ultra HD 26th July 2021, exclusive to Zavvi. END_OF_DOCUMENT_TOKEN_TO_BE_REPLACED
Top PicksView