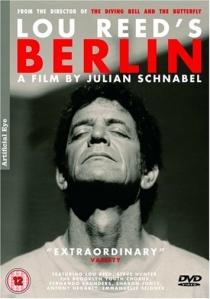 Artificial Eye (UK) is pleased to announce that Lou Reed's critically acclaimed concert film Lou Reed's Berlin, directed by Julian Schnabel (The Diving Bell and the Butterfly) will be officially released on DVD and Blu-ray on 6th October 2008.

Staging Berlin has been discussed for over 30 years and in December of 2006 it became a reality. Berlin was said to be one of the most depressing albums ever made and as it was brought to life it was far from dismal. Using the divided city of Berlin as its backdrop the story of Caroline and her lovers is told through the emotive and provocative words of Lou Reed. With performers like Fernando Saunders, Antony, Steve Hunter, Rob Wassermann, Rupert Christie and Sharon Jones, a seven piece orchestra and the Brooklyn Youth Chorus all working to create a captivating and enveloping world, Lou Reed is able to take the audience with him as he bares witness to Caroline's self-destruction.

Julian's set design creates the backdrop of a hotel with greenish walls and Lola Schnabel's films display the beauty and tragedy of the narrator's leading lady (played by the French actress Emmanuelle Seigner), adding to the experience which is so devastating and beautiful at the same time. Julian Schnabel was born in Brooklyn, New York. He graduated with a B.F.A. from the University of Houston and participated in the Whitney Museum Independent Study Program. He had his first solo painting exhibition at the Mary Boone Gallery in New York in 1979. Since then, his paintings have been included in many important public and private collections around the world. His films include Basquiat, Before Night Falls, which won the Grand Jury Prize at the Venice International Film Festival in 2000, The Diving Bell And The Butterfly, and Lou Reed's Berlin.

BD
Arriving on DVD and Blu-ray 31st May 2021 from Acorn Media (UK), the hit police corruption drama from the makers of Bodyguard returns as Series Six of Line of Duty sees AC-12 facing their most ... END_OF_DOCUMENT_TOKEN_TO_BE_REPLACED
Top PicksView