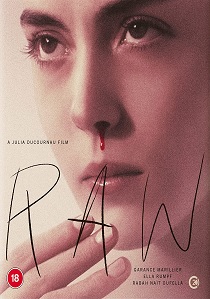 NewsHorrorThriller
News Article Go back to homepage
Get ready for a second helping of Raw, as the deliciously dark tale of a strict vegetarian who discovers a taste for human flesh, gets a Standard Edition Blu-ray release thanks to Second Sight Films on 8th August 2022.
Garance Marrilier, Ella Rumpf, Rabah Nait Oufella, Laurent Lucas, Joana Preiss, Bouli Lanners
Julia Ducournau
Jean des Forêts
Second Sight Films
1 hour 39 minutes
08/08/2022
#Raw
Thank you for supporting DVD365.net when you order using the link(s) below. As an Amazon Associate we earn from qualifying purchases
Buy BD
Information

Get ready for a second helping of Raw, as the deliciously dark tale of a strict vegetarian who discovers a taste for human flesh after heading to a brutal veterinary college where initiation ceremonies are the norm, gets a Standard Edition Blu-ray release thanks to Second Sight Films. This horror hit will be dished up on 8th August 2022.

BAFTA nominated and Palme d'Or winner Julia Ducournau's (Titane) shocking feature film debut was acclaimed by critics after a barnstorming debut at Toronto International Film Festival, where paramedics had to be called after audience members fainted at the film's premiere. Now, after wowing audiences on its initial release and its hugely successful Limited Edition, Second Sight has once again pulled the Raw ingredients together for the brilliant Raw Standard Edition release, that has a full menu of extras.

Shy student Justine (Garance Marillier - Warning, Titane), heads to a veterinary school and is subjected a tough series of hazing rituals from fellow students. And it's even tougher for vegetarian Justine as she is covered in blood and forced to eat raw meat. But after tasting the flesh, Justine finds herself craving even more meat - and it doesn't matter if it's animal or human as her uncontrollable desires lead to a horrific outcome.

Second Sight has produced a sumptuous buffet for your delectation, with features including interviews with star Garance Marilier and producer Jean des Forets, commentary from critic Alexandra West, as well as interviews and commentaries from Julia Ducournau and plenty more, this is a dish that tastes as good as it looks.

HotUHD
After moving to a new town, two brothers discover that the area is a haven for vampires as the classic The Lost Boys is released on 4K UHD 20th September 2022 from Warner Home Video. END_OF_DOCUMENT_TOKEN_TO_BE_REPLACED
Top PicksView