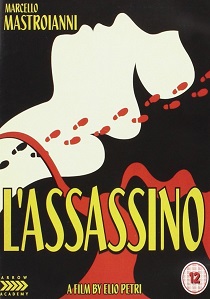 Arrow Films' Arrow Academy label is thrilled to announce the release of L'Assassino, making its UK home entertainment debut on both Blu-ray and DVD formats on 21st July 2014 in a gorgeous new restoration by the Cineteca di Bologna.

Movie critics would probably agree that the early 1960s marked the highpoint of Italian cinema both in Italy and internationally. And it was in this period that there came the debut of a director who would later become one of the major Italian political filmmakers of the 1960s and 1970s: Elio Petri.

In 1961, Petri made his feature debut with L'Assassino. It follows the police investigation concerning Alfredo Martelli (a young Marcello Mastroianni), a sleazy thirty something antique dealer accused of having murdered his older mistress, the wealthy socialite Adalgisa De Matteis (Micheline Presle). On a first look, the film is a thriller, a favourite genre of Petri's; the director often stated that he had always had "a predilection for mystery novels," especially when they provide a chance to scrutinise contemporary society.

Indeed, L'Assassino mixes elements of a mystery plot with a Kafkaesque atmosphere and an explicit critique of the rising upper-bourgeois society in Italy in the early 1960s. Through the examination of a cynical social climber who finds himself in trouble and gets punished for his greediness, unloving personality, and ambiguous morality, the film criticises the rampant capitalism, the nouveaux riches, and the early negative consequences of the Italian "economic boom" of the 1950s.

This jam-packed disc will be released as a deluxe Blu-ray and DVD combo featuring a host of special features, including the stand-out 52-minute documentary, Tonino Guerra - A Poet in the Movies, about the screenwriter who not only co-wrote L'Assassino but also many other major masterpieces of Italian and world cinema such as Antonioni's Blow-Up, Fellini's Amarcord and Tarkovsky's Nostalghia). Alongside this, this disc will feature a ten-minute introduction to the film and it's still under appreciated director Elio Petri by Italian cinema expert Pasquale Iannone.

The disc will also include a new collector's booklet featuring new writing on the film by Camilla Zamboni, plus a selection of contemporary reviews and Petri's own critical analysis of 1950s Italian cinema illustrated with original and newly commissioned artwork by Jay Shaw.

Best known for Investigation of a Citizen Above Suspicion and The Tenth Victim, Petri was one of the finest and yet most underrated Italian directors of the 1960s and 70s. Highly acclaimed on its original UK release but unjustly neglected since, L'Assassino is a remarkably assured debut from one of the cinema's sharpest chroniclers of Italian social and political realities. Petri said that he wanted to reflect the changes wrought by the early sixties, and to examine "a new generation of upstarts who lacked any kind of moral scruple".

Arrow Academy is proud to present the first ever UK video release of L'Assassino in a gorgeous high-definition restoration created by the Cineteca di Bologna.