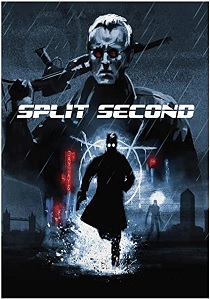 101 Films presents Split Second (1992), a dark, dystopian thriller starring Rutger Hauer (Blade Runner) as a veteran detective on the trail of a serial killer in a rainswept future London. Co-starring Alastair Duncan and Kim Cattrall and supported by a host of legendary British character actors, this newly restored presentation of the film is complemented with extensive new interviews with the filmmakers.

The year is 2008, and heavy rainfall has flooded large areas of London. Rookie police officer Dick Durkin (Alastair Duncan) is assigned to partner maverick Harley Stone (Rutger Hauer), a burnt-out and highly cynical homicide detective who was unable to prevent the murder of his partner by a serial killer three years earlier.

Following a spate of murders it appears that the killer has returned, and Stone and Durkin are assigned to the case. After investigating the scenes of several slayings they appear no closer to identifying the killer, but a mysterious connection to Stone keeps the trail warm. As each gruesome murder draws the detectives closer to the killer, the killer gets closer to them, until they must finally confront the true evil that lurks below the streets of London.

Split Second is released 27th July 2020 on Blu-ray newly scanned, restored and colour graded in 4K from the 35MM internegative. 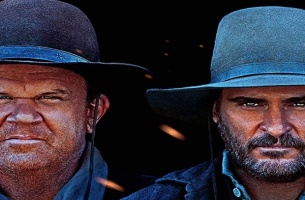 HotDVD
Based on Patrick deWitt's acclaimed novel, The Sisters Brothers, released on DVD 12th August 2019 from Universal Pictures (UK), is set during the 1850's gold rush and follows two brothers earning a living as hired guns as they hunt down a chemist ... END_OF_DOCUMENT_TOKEN_TO_BE_REPLACED
Comments
DVD Releases News Pick