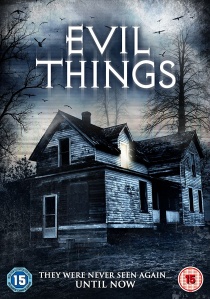 On 9th January 2009, 5 college students left New York City for a weekend in the country. 48 hours later, all 5 students simply vanished without a trace. There were no leads and no evidence...until now!

It was Miriam's 21st birthday and as a gift her aunt lent out her beautiful country house for the weekend. Miriam invited college friends Cassy, Mark, Tanya and Leo to join her. Leo was an aspiring film maker and brought his video camera along to document their journey. What is captured on his video, and now this DVD, is not a celebration but a sinister and nightmarish descent into pure terror.

UHD
For the first time in the cinematic history of Spider-Man, our friendly neighborhood hero's identity is revealed in Spider-Man: No Way Home, released on DVD, Blu-ray and 4K UHD 4th April 2022 from Sony Pictures Home ... END_OF_DOCUMENT_TOKEN_TO_BE_REPLACED
Top PicksView