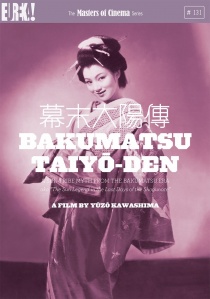 News
News Article Go back to homepage
Released as part of Eureka Entertainment's Masters of Cinema Series on Blu-ray and DVD on 22nd April 2013, barely known in the West, Bakumatsu taiyô-den is one of the most revered Japanese films of all time in its native country, voted the fifth greatest Japanese film ever in 1999.
Toshiyuki Ichimura, Izumi Ashikawa, Yûjirô Ishihara, Yôko Minamida, Sachiko Hidari, Furankî Sakai
Yûzô Kawashima
Takeshi Yamamoto
Eureka
1 hour 50 minutes
22/04/2013
Thank you for supporting DVD365.net when you order using the link(s) below. As an Amazon Associate we earn from qualifying purchases
Buy DVD
Buy BD
Information

Voted one of the top five Japanese films ever made in a critic's poll by Japan's leading cinema publication Kinema Junpô, yet barely known in the West, Yûzô Kawashima's richly funny multi-levelled portrait of Japanese society Bakumatsu taiyô-den [A Sun-Tribe Myth from the Bakumatsu Era] is a glorious rediscovery.

When man-about-town Saheiji (the beloved comedian Frankie Sakai) finds himself unable to pay for a bill at a brothel, he is forced to remain there to work off his debt. However he finds his wit and resourcefulness enable him to turn this situation to his advantage, as he interacts with a whole range of characters, from rivalling courtesans to political activists.

Co-scripted by Shôhei Imamura (Vengeance Is Mine), it sharply and comically demonstrates the constants of human nature just as it delineates the tumultuous political times (the 1860s, leading up to the Meiji Restoration) in which they lived. The Masters of Cinema Series is proud to present this classic in a new high-definition restoration.

BD
After more than thirty years of service as one of the Navy's top aviators, Pete 'Maverick' Mitchell is back where he belongs as Top Gun: Maverick flies onto DVD, Blu-ray and 4K UHD 31st October 2022 from Paramount Home ... END_OF_DOCUMENT_TOKEN_TO_BE_REPLACED
Top PicksView