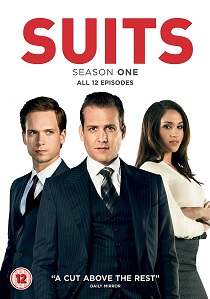 From the producers of The O.C. comes the sharp new show Suits Season One, a witty, sassy and slick new legal drama available on DVD on 30th April 2012, from Universal Playback.

Already renewed for a second season and currently DAVE's number one TV programme, Suits is positively brimming with complex cases, morally bankrupt schemers and banter more cutting than a diamond-lined cheese-wire. In others words, Ally McBeal it ain't.

Mike Ross (J.Adams) has always dreamt of becoming a lawyer but life has taken him in a very different direction. The college drop-out genius is accidently interviewed by Harvey Specter (Macht), the sharp-suited shark on legs and blags the job as associate at a leading New York law firm - minus any qualifications. This unexpected opportunity quickly propels him into a world where your morals are left at the door.

The show also boasts a strong entourage of supporting characters; Harvey and Mike's in-house rival Louis Litt (Hoffman) who is keen to establish himself as the true power in the firm and Jessica Pearson (Torres) plays Harvey's feisty boss. Along with demanding clients, courtroom hangers-on, ex-mentors, ex-lovers and downright baddies, the boys will have to fight extra hard to stay on top.

The DVD box-set has a courtroom full of exclusive material including deleted scenes, a gag reel and commentary that takes you closer to the drama. So dig out your best suit, slick back your hair and get ready to step into court as the sharp legal drama Suits Season One comes to DVD from 30th April 2012.