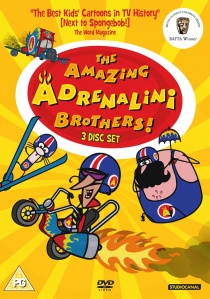 Directed by Dan Chambers and Claire Underwood and starring Sartaj Garewal, Dan Chambers and Mark Huckerby the 3 disc set The Amazing Adrenalini Brothers is out to own on DVD from 9th April 2012 from StudioCanal.

Xan, Adi and Enk are three death-defying daredevil brothers from the mysterious land of Réndøosîa (a fictional Eastern European country that experiences an unusually high rate of natural disasters). They eat, sleep and breathe danger. They tour around the world with one mission only: perform the biggest, craziest, most dangerous stunts EVER... No fear! No limits!

The series had its origins as a British student review act in the 1990s, written and performed by The Pox, aka Dan Chambers, Mark Huckerby and Nick Ostler. With ambitions to turn their act into animation the trio presented their ideas to UK Studio Pesky, who had just been approached by the BBC to develop a new Flash Animation series for the relaunch of its CBBC website - they immediately saw the potential and The Amazing Adrenalini Brothers cartoons were born.

Broadcasters picked up these shorts across America, Europe and Japan, winning audience awards at animation festivals in France (Annecy) and Brazil (Animamundi). This success led to calls for a longer series and in 2005 Pesky joined forces with Studio B Productions in Canada to co-produce a whopping 78 x 7 minutes of high octane action that would see our danger maniac heroes in action all round the globe.

The Amazing Adrenalini Brothers aired on ITV in the UK and on Cartoon Network across Europe and Asia, as well as on YTV in Canada and ABC Australia. The Amazing Adrenalini world tour has so far encompassed over 80 countries and has even taken the Brothers up the red carpet to receive the Best Children's Animation BAFTA in 2006.