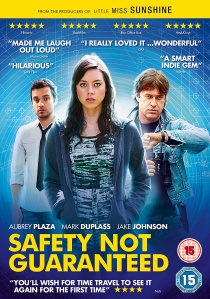 What's Your Mission? In Safety Not Guaranteed, released on DVD and Blu-ray by Vertigo Films on 24th February 2014, three employees of Seattle Magazine head to the scenic, seaside community of Ocean View, WA to find and profile the man behind a bizarre and hilarious classified ad looking for a partner to travel through time.

The mismatched trio land in Ocean View with no more than a PO Box number to guide them in their investigation, but no sooner have they checked into their hotel than Jeff abandons the job to track down a long lost love interest who lives in the beach community. Darius asserts herself as the lead reporter and discovers their subject, Kenneth (Mark Duplass) - a quirky and offbeat character - stocking canned goods at the local grocery store. Darius' disaffected attitude serves her well, perhaps for the first time ever, and quickly endears herself to Kenneth as she poses as a candidate to accompany him on his mission. Kenneth is leery of Darius' motives and is not entirely convinced that she isn't working for the "secret agents" that are tracking his every move, but through a series of training exercises she begins to gain his trust. And while the absurdity of their missions is without question, the dedication and skill that Kenneth puts into his time machine are no laughing matter.

Jeff meanwhile tracks down Liz (Jenica Bergere), his fling from his teenage years, and though she does not embody his fond memories, they reconnect. He is deeply stung when she is ultimately the one to reject him. As Darius gets pulled further into the strange world of Kenneth, Arnau and Jeff form a bond and the isolation in their lives pushes them into a night to be remembered.

Changing the past, preventing the future, altering the present - the mission is different for everyone, but the power to hope for something better is universal.

DVDTV
02/03/2021
The BAFTA-winning hit Unforgotten, released on DVD 26th April 2021 from BBC Worldwide, returns for a fourth series, as Cassie and Sunny investigate a cold case with alarming links to the police force.