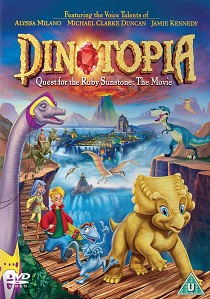 Dinotopia: Quest for the Ruby Sunstone (2005)

26, the beloved young dinosaur from the hit mini-series, stars in an all-new, feature-length animated movie set on the island where humans and dinosaurs co-exist. Representing The perfect Easter treat, Universal Pictures (UK) has announced the 30th March 2009 DVD release of Dinotopia - Quest for the Ruby Sunstone.

Hoping to see the world, 12-year-old orphan Kex stows away in a lifeboat. Instead he is washed overboard and finds himself stranded on an uncharted island. To his surprise, Kex discovers that he is in a land called Dinotopia, where dinosaurs have not only survived and developed the ability to speak, but have learned to live in harmony with human beings.

Kex is befriended by a young dinosaur named 26, who teaches him about life on the island. Unfortunately trouble comes to paradise when the evil Ogthar is released from his stone prison and recovers the Ruby Sunstone, whose dark power can endanger all of Dinotopia. Can 26, Kex and the other dinosaurs defeat Ogthar and save their magical home?

BD
In The Undoing, released on DVD and Blu-ray 22nd March 2021 from Warner Home Video, a chasm opens up in the seemingly perfect life of a successful therapist: a violent death, a missing spouse, and a ... END_OF_DOCUMENT_TOKEN_TO_BE_REPLACED
Top PicksView