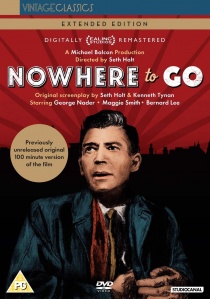 Directed by Seth Holt (The Nanny and Blood From The Mummy's Tomb), Nowhere To Go, released on DVD by StudioCanal on 14th January 2013, is a stylish, grimy tale of deception and betrayal. A rare, late excursion into film noir for Ealing Studios, scripted by first-time director Holt and critic Ken Tynan.

Paul Gregory (George Nader, Robot Monster) is a thief and conman. He has come to London from Canada in order to rob Harriet Jefferson (Bessie Love, The Lost World) of her rare coin collection. Having sold the coins, he puts the money in a safe deposit box and waits to be arrested, expecting to be out in five years. Sentenced instead to ten years, Gregory breaks out of prison with the help of Victor Sloane (Bernard Lee, The Third Man, Dr. No, Goldfinger, From Russia with Love), planning to collect the money then leave the country. A series of accidents and double-crosses sends Gregory spinning through London's criminal underworld, before he ends up on the run in the Welsh countryside with socialite Bridget Howard (Maggie Smith, TV's Downton Abbey, The Prime of Miss Jean Brodie).

Often described as "the least Ealing film ever made", the film features an audacious, almost soundless 9 minute prison break opening sequence and a jazz score by British musician Dizzy Reece. Nowhere To Go was also Maggie Smith's feature film debut, for which she was nominated for Most Promising Newcomer at the BAFTAs.

Most excitingly, this release features the full 100 minute version of the film - on its original release MGM cut it by 15 minutes in order to fit it into a double bill. 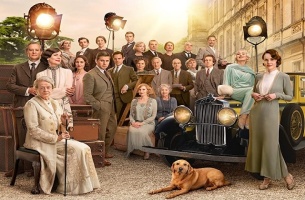 HotDVDBD
With stunning revelations, glamorous journeys, and the arrival of the Jazz Age, Downton Abbey: A New Era, released on DVD and Blu-ray soon from Warner Home Video, will be the Crawleys' biggest adventure yet as they grapple with their future and new intrigue about the past. END_OF_DOCUMENT_TOKEN_TO_BE_REPLACED
Comments
BD Releases News Pick