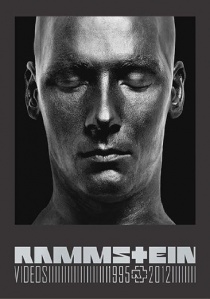 What sounds like a compendium of midnight movies is really just a collection of music videos. If we call them clips, at least Americans will think of the gun magazines they use to reload their weapons. That suits the explosive content when Spinefarm Records release Rammstein: Videos 1995-2012 on DVD and Blu-ray from 17th December 2012.

With just a small creative core to set the agenda, Rammstein have consistently created stunning image sequences that are unparalleled internationally. Directors working with the band have demonstrated a clear sense of vision, tremendous courage, plus a unique refusal to compromise - and no box-set to date can attest to this as gloriously as the forthcoming box set.

Almost a decade after the arrival of their first video retrospective, 'Lichtspielhaus' (2003), an up-to-date and more complete picture of the band has finally emerged. While the clips show Rammstein in their purest form, a few lesser-known facts also come to light, primarily via the behind-the-flames footage from the individual shoots, plus the many interviews with the various people involved and of course the band members themselves.

A high point is the new clip for 'Mein Herz Brennt' (My Heart Burns), lead track on the seminal Mutter album (2001) and the story behind it. So time-consuming was the promo to get right, that some of the band members started to see it as the 'eternal video', one they would be working on until their collective death. It ultimately took several attempts and the work of two directors to get this monumental piece off the ground.

Not only did this result in one of the most unusual videos in the history of a band notorious for their output in this area (Du Hast, Sonne, Links 2 3 4, Mein Teil, Mann Gegen Mann, Pussy, etc.); but as a reward for all the hard work, some extra footage was shot featuring front-man Till Lindemann in a solo performance of the 'piano version' of Mein Herz Brennt.

Videos 1995 - 2012, is available as a Digi-pack Box Set with 3 DVDs or two Blu-ray discs; all 25 videos, including the makings-of (24), have been recently updated - a full eight hours of official content complete with a detailed, 56-page booklet plus lenticular cover.

With this box set, Rammstein presents itself in all its glory: larger than life, larger than Hollywood.