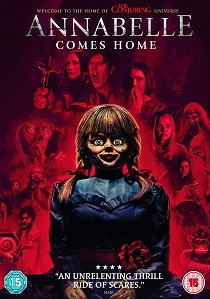 Annabelle Comes Home, released 18th November 2019 on DVD and Blu-ray from Warner Home Video, is the third installment of the hugely successful Annabelle films starring the infamous sinister doll from the Conjuring universe. Gary Dauberman, the screenwriter of the Annabelle films, IT and the upcoming IT Chapter Two, and The Nun, makes his directorial debut on the film, which is produced by Peter Safran (Aquaman), who has produced all the films in the Conjuring franchise, and Conjuring universe creator James Wan (Aquaman), who has produced the last five film's under his Atomic Monster banner.

Determined to keep Annabelle from wreaking more havoc, demonologists Ed and Lorraine Warren bring the possessed doll to the locked artifacts room in their home, placing her "safely" behind sacred glass and enlisting a priest's holy blessing. But a year later, an unholy night of horror awaits the Warrens' ten-year-old daughter, Judy, and her friends after a visit to the room awakens Annabelle... and all the evil spirits residing there.

DVD
Villanelle and Eve are back again with more explosive action and breathtaking cliffhangers in the latest instalment of the multi-award winning drama Killing Eve, released on DVD 2nd November 2020 from ... END_OF_DOCUMENT_TOKEN_TO_BE_REPLACED
Hot PicksView