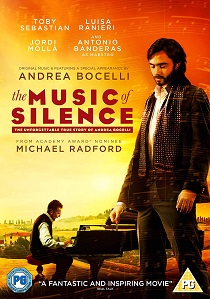 Internationally renowned tenor Andrea Bocelli has been entertaining and thrilling audiences all over the world with his astounding voice for some 25 years, selling more than 20 million records, filling stadiums galore, and bringing joy to the masses.

He has earned critical acclaim and many accolades including Best in the World at the American Music Awards, a Classical Brit Award, a Billboard Latin Music Award and a Golden Globe and has performed for Popes, Presidents, Prime Ministers, Kings, Queens and Princes, and performed with world famous singers including Pavarotti, Celine Dion and Ed Sheeran. Now his amazing life story is told in a fascinating biopic, The Music of Silence, based on his bestselling book.

Starring Game of Thrones' Toby Sebastian, Hollywood favourite Antonio Banderas, and an appearance from Bocelli himself, who also provides his angelic singing, The Music of Silence arrives on DVD and digital from 4Digital Media on 29th October 2018.

Before he was Andrea Bocelli, he was Amos Bardi. Born nearly blind and gifted with a superb voice, Amos (Sebastian; Barely Legal) is separated from his family to attend an institute for the visually impaired, but a terrible accident occurs while he's there, resulting in complete loss of sight.

Despite being told that he will never be a serious opera singer, Amos is driven by great ambition and with the help of his maestro (Banderas; The Mask of Zorro, Puss in Boots), overcomes every obstacle and achieves his first great success on stage. From there, he begins a life studded with victories and becomes one of the most renowned opera singers in the world.

With an astounding soundtrack featuring the voice of a living legend and superb performances, experience the wonder of The Music of Silence.

DVD
Disney and Pixar's original feature film Luca, released on DVD, Blu-ray and 4K UHD on 23rd August 2021, is a fun and heartwarming story about friendship, stepping out of your comfort zone and two ... END_OF_DOCUMENT_TOKEN_TO_BE_REPLACED
Top PicksView