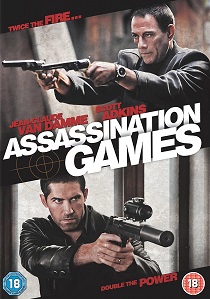 International action icon Jean-Claude Van Damme (Universal Soldier franchise) and rising star Scott Adkins (The Bourne Ultimatum, Undisputed franchise) team up for the first time in the non-stop, pulse-pounding action thriller Assassination Games, hitting DVD on 10th October 2011 from Sony Pictures Home Entertainment. Two rival assassins, one a knife expert and the other a sharpshooter, form an unlikely partnership in order to take down the ruthless head of a drug cartel.

Brazil (Jean-Claude Van Damme) is a contract killer, willing to take any job if the price is right. Flint (Scott Adkins) left the assassin game when a ruthless drug dealer's brutal attack left his wife in a coma. When a contract is put out on the coldblooded drug dealer, both Brazil and Flint want him dead - one for the money, the other for revenge. With crooked Interpol agents and vicious members of the criminal underworld hot on their trail, these two assassins reluctantly join forces to quickly take out their target before they themselves are terminated.

Directed by Ernie Barbarash from a screenplay by Aaron Rahsaan Thomas, Assassination Games was produced by Justin Bursch, Brad Krevoy and Patrick Newall.

DVD
A teenage murder witness finds himself pursued by twin assassins in the Montana wilderness with a survival expert tasked with protecting him as Those Who Wish Me Dead arrives on DVD and Blu-ray 30th ... END_OF_DOCUMENT_TOKEN_TO_BE_REPLACED
Top PicksView