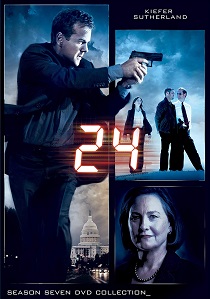 Exiled CTU agent Jack Bauer returns from Africa to Washington for Day 7, which promises to be the most dangerous day of 24 yet. Released on the 19th October 2009 by Twentieth Century Fox Home Entertainment, 24 Season 7 celebrates its milestone 150th episode in the fourth hour, and provides another full day of addictive, non-stop television.

Jack Bauer (Golden Globe® and Emmy® winner Kiefer Sutherland) was last seen surrendering himself to the US government and returning to Washington to face trial for human rights violations during his time at the now obsolete CTU. Jack is saved from judgement, however, when FBI agent Renee Walker (Annie Wersching) wrenches him out of his hearing to help with a desperate national security crisis. Jack's day takes an even-stranger twist when he discovers ex-CTU Agent Tony Almeida (Carlos Bernard) is very much alive and working for the terrorists!

Has Tony renounced his past as radical fighter and succumbed to terrorist brainwashing? Or is he deeper undercover than anyone can guess? As more familiar faces are revealed and Jack becomes further entangled in a web of lies and corruption, his day becomes a thrilling race against the clock to prevent each terrifying terrorist attack from exploding into mass destruction.

The season introduces many new characters from FBI agents Janis Gold (Janeane Garofalo) and Larry Moss (Jeffrey Nordling), who are also patriotically fighting for their country, to the first female president of the US, Alison Taylor (Cherry Jones). Also returning are 24 stalwarts Chloe O'Brian (Mary Lynn Rajskub) and Bill Buchanan (James Morrison), working under-cover to discover the mole that is shrewdly infiltrating the White House for the ruthless and corrupt businessman Jonas Hodges (BAFTA® and Academy Award® winner Jon Voight).

The explosive Season 7 is the first season of 24 to be released on both DVD and Blu-Ray! The high-definition format makes every detail of Jack's action-packed day unmissably realistic, and will draw viewers deeper into the catastrophic destruction and nail-biting tension that is 24 Season 7.

With its electrifying whirlwind of action and corruption, 24 Season 7 is an undeniable must-have for all 24 addicts.