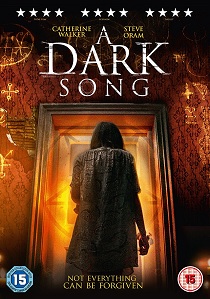 NewsHorrorThriller
News Article Go back to homepage
In A Dark Song, released on DVD 7th August 2017 from Kaleidoscope Home Entertainment, a grief-stricken mother reaches out to an occultist that she believes will allow her to make contact with her deceased child.
Steve Oram, Catherine Walker, Susan Loughnane, Mark Huberman
Liam Gavin
David Collins, Tim Dennison, Cormac Fox
Kaleidoscope Home Entertainment
1 hour 40 minutes
07/08/2017
#ADarkSong
Thank you for supporting DVD365.net when you order using the link(s) below. As an Amazon Associate we earn from qualifying purchases
Buy DVD
Information

Sophia is grief-stricken and overwhelmed with sadness since the untimely death of her young son. In a desperate attempt to achieve some form of closure, she reaches out to Solomon, an occultist with experience in an ancient invocation ritual that Sophia believes will allow her to make contact with her deceased child.

Locked away in a remote country house, the pair undergo a long and arduous ritual, risking both their mental and physical safety as they attempt to access a world beyond their understanding.

But when Solomon finds out that Sophia has not been truthful about her wish, a greater danger threatens them. In the dark, they find that they are no longer alone in the house. They are now in the world of real angels, and real demons.

HotDVDBDUHD
An action thriller unlike any other, a young getaway driver relies on the beat of his personal soundtrack to be the best in the game in Baby Driver, the newest explosion of genre-crossing excitement from writer-director Edgar Wright, released on 4K Ultra HD, Blu-ray and DVD ... END_OF_DOCUMENT_TOKEN_TO_BE_REPLACED
Top PicksView