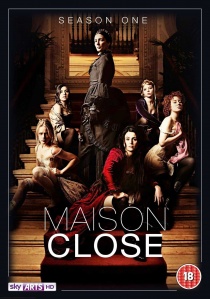 Arrow Films have today confirmed that the Blu-ray & DVD box set release of Maison Close: Season 1 will be available in the UK on 3rd September 2012. Set in a nineteenth century Parisian brothel, Maison Close is a unique new eight-part series which adds a controversial and contemporary twist to the traditional costume drama format.

The story follows the lives of Veris, Hortense and Rose, who work in the mysterious and opulent whorehouse, "Paradise", a brothel renowned for entertaining Parisian barons and aristocrats. Set in 1871, Maison Close tells the story of the three women as they try to escape servitude.

Veris, at 35, knows the end of her career as a prostitute is near. All her hopes are resting on the Baron du Plessis, her main customer and the only one able to redeem her dept.

Hortense is the owner of the "Paradise". She must retain her girls and withstand the pressures of a thug from the suburbs who is demanding money from her.

Still a young girl, Rose arrives in Paris in search of her mother, a former prostitute. She is naive and ends up working at the Paradise to pay-off her debts.

Beyond the fate of our new-found heroines, Maison Close takes an uncompromising look at the world of brothels and prostitution in the late nineteenth century. The series combines a hard-hitting emotional story and graphic reality with modern production techniques and a rock & roll soundtrack.

Following the unbridled success of their French cop series Braquo, Arrow are once again looking across the channel to bring the world's finest television shows to UK viewers.

3D-BD
After escaping an attack by what he claims was a 70-foot shark, Jonas Taylor must confront his fears to save those trapped in a sunken submersible as The Meg arrives on DVD, Blu-ray, 3D Blu-ray, 4K ... END_OF_DOCUMENT_TOKEN_TO_BE_REPLACED
Hot PicksView