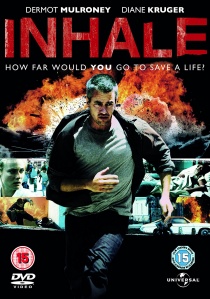 Witness the shocking action and intrigue of organised crime, deep in Mexico's heartland from the safety of your own home from 1st August 2011 when Universal Pictures (UK) releases Inhale on Blu-ray and DVD.

Inhale leads us on a journey of desperation as an all American couple go to deadly and dangerous lengths to save the life of their critically ill daughter. Paul Stanton (Dermot Mulroney - The Wedding Date) and wife Diane (Diane Kruger - Inglorious Basterds) convincingly portray the torture endured by parents of a child for whom time is running out. This film's excitement simmers right from the beginning as Paul abandons everything he stands for to travel to the violent Mexican underworld to illegally purchase human lungs from a human organ trafficking ring.

A race through the slums of Mexico will keep audiences heart's pumping as Paul is forced to make a life or death decision, but no matter the outcome, his decision will haunt him for the rest of his life.

Inhale demonstrates a u-turn from privileged existence in the US to desperate struggles on the streets of Mexico. Viewers will be haunted by the reality of organised crime in Central America and its disturbing affects on often innocent victims.

UHD
An expert cutter must outwit a dangerous group of mobsters in order to survive a fateful night in The Outfit, released 1st August 2022 on DVD, Blu-ray and 4K UHD from Dazzler Media. END_OF_DOCUMENT_TOKEN_TO_BE_REPLACED
Top PicksView