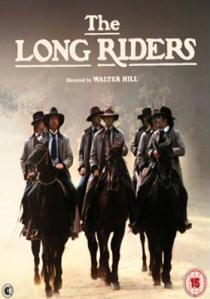 The film follows the exploits of the infamous Jesse James/Cole Younger gang made all the more authentic by Hill's casting of real life brothers David, Keith and Robert Carradine, James and Stacy Keach, Dennis and Randy Quaid and Christopher and Nicholas Guest.

In post-Civil War America the legendary band of outlaws blaze a trail across the west, culminating in the infamous Northfield, Minnesota bank raid and one of the most acclaimed and explosive climaxes ever committed to film. With stunning cinematography and an evocative Ry Cooder soundtrack and inspiration drawn from John Ford to Sam Peckinpah, Walter Hill's The Long Riders is an elegiac portrait of a bygone era and one of the last great Westerns of the 20th Century.