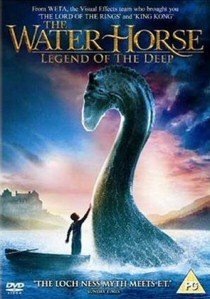 The legend of the Loch and its mysterious inhabitant has captured the imagination of millions of people worldwide for generations. Now the ancient myth is brought vividly to life in the enchanting The Water Horse: Legend of the Deep, available to buy on DVD, Blu-ray and UMDTM Video and to rent on DVD from 30th June 2008, courtesy of Sony Pictures Home Entertainment.

The story begins when a lonely young boy named Angus MacMorrow (Etel) takes home a strange object he finds on the beach. He soon realises that it is a magical egg and finds himself raising an amazing creature: a mythical 'water horse.' Angus and the creature, who he names Crusoe, soon form a strong bond of friendship, and Angus begins an extraordinary journey of discovery, protecting a secret that gives birth to a legend.

Boasting breathtaking special effects created by the special-effects team behind The Lord of the Rings, The Chronicles of Narnia{/} and Charlotte's Web, this release is perfect entertainment for the whole family this summer. The DVD is also packed with unmissable special features, including interviews with cast and crew and deleted scenes.

Related Articles
The City and the City, Britannia: Season 1, The Missing: Series 2, The Ones Below, Holding On, The Missing, The Driver, The 7:39, Welcome to the Punch, Jeremy Clarkson: War Stories, Blitz, Cape Wrath, Britannia: Series 2, The Singapore Grip, Britannia: Series 3, Sherwood
Rise Of The Planet Of The Apes, Medici: Masters of Florence, Churchill, The Autopsy of Jane Doe, Forsaken, War and Peace, The Game, Human Universe, Blood, Wonders of Life, As Good As Dead, Exit Humanity, The Slap, Manhunter: 25th Anniversary Edition, Wonders of The Universe, The Sinking Of The Laconia, The Day Of The Triffids, Zodiac, Running with Scissors, The Bourne Identity: Special Edition, The Bourne Identity, The Bourne Supremacy, The Corruptor, The Ring : Collectors Edition, The Ring, Super Troopers, The X-Men 2, The Planets, Succession: Season 2, The Bay of Silence, Last Moment of Clarity
Apple Tree Yard, Dates, World Without End, Mad Dogs, London Boulevard, Apple Tree Yard, Lost Souls, The Thin Red Line, Press, The Children Act
King Kong
Comments
DVD Releases News Pick