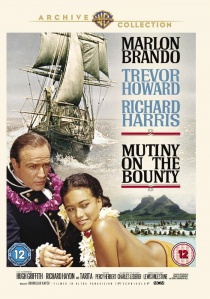 Warner Home Video presents a deluxe 2-Disc Special Edition of Mutiny On The Bounty, released on 4th June 2007, starring Marlon Brando, Trevor Howard and Richard Harris. This DVD release will feature a newly remastered presentation of the 1962 spectacular that was nominated for seven Academy Awards,® including Best Picture. This is the first time that the film has been released on DVD in the UK and this special edition boasts a new Dolby Digital 5.1 audio track as well as hours of bonus material including five featurettes.

In 1787, the HMS Bounty set out on a journey that took it through perilous seas to a tropical paradise - and into history as one of the most ill-fated vessels ever to sail for King and country. Lewis Milestone (All Quiet on the Western Front, Ocean's Eleven) directed this colour-drenched spectacular which is based on a true story and centres on conflict between two men. Marlon Brando puts his own stamp on the role of first officer Fletcher Christian, the tormented first mate transformed into a man of action. Trevor Howard (Brief Encounter, Ryan's Daughter) is Capt. William Bligh, uncompromising in his command and his cruelty, driving men to desperation - and to mutiny.

Richard Harris (Unforgiven, Camelot), Hugh Griffith (Tom Jones, Ben-Hur) and Richard Haydn co-star in this epic adventure which is also well known for being the film where Marlon Brando met and fell in love with actress Tarita (who plays Tahitian beauty Maimiti) who would later become his third wife.