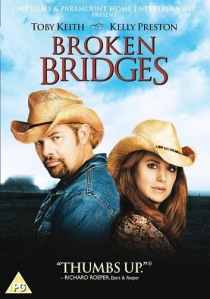 Paramount Home Entertainment presents Broken Bridges, available to buy on 26th March 2007 (RRP £12.99), a bittersweet tale of two former high school sweethearts meet up again after a family tragedy and end up re-evaluating their lives and facing the ghosts of their pasts. Featuring a stellar cast, Broken Bridges is a journey of discovery about love, life and hope.

Country music star Toby Keith (CMA and Academy of Country Music award winner) makes his feature film debut as Bo Price, a fading country music singer who has slipped from the spotlight and is desperately trying to resurrect his career.

Following the tragic death of his younger brother he returns home to be with his family. Bo is reunited with his former high school sweetheart Angela (Kelly Preston, Jerry Maguire, Waiting to Exhale), who is also recovering from the loss her own brother. After realising that Angela is the only true love of his life, a second surprise is in store for Bo when he meets his sixteen year old daughter Dixie (Lindsey Haun, Alias, Malcolm in the Middle) for the first time.

Can Bo mend the bridges he broke when he left his loved-ones and hometown for fame and fortune? Or will he abandon his family again to revive his music career?

Released by Paramount with a host of extras, Broken Bridges features a dynamic cast, including a fantastic performance from Burt Reynolds and a brilliant country music soundtrack in an insightful tale about family, love and salvation.