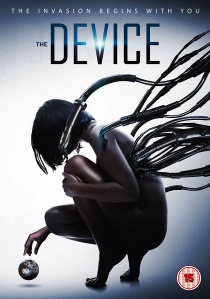 Deep in the eerie forest lies a mysterious entity waiting to defy nature in a beguiling new psychological sci-fi thriller. Exposing its sinister purpose, the deadly alien invasion on humanity is born in The Device, coming to DVD from Image Entertainment.

Inspired by classic abduction cases writer and producer John Portanova (The Invoking) skillfully plays on the intrigue of the unknown. Starring Angela DiMarco (Trauma), David S. Hogan (Shadowed) and Kate Alden (The Right Place), The Device comes to DVD on 23rd March 2015 and features an audio commentary by the screenwriter of Fire in the Sky and Intruders, two of the most popular alien abduction films ever.

When two sisters find a harmless looking object in the woods, they cannot know to what extent it will change their world - and ours - forever. The small, sphere - mysterious, seductive, enticing - conveys a message, a deep, profound biological message, that will reshape our world, recasting relationships with the universe beyond our wildest dreams and worst nightmares.

Compelled by curiosity, they soon discover that there is more than meets the eye to this ethereal object. It holds the key to our destiny. It holds the secret to a new kind of life. It holds the embryo of a plan for alien invasion. It is so much more than just The Device.

The key to our future... or the seed of our extinction? The chilling truth is unearthed in The Device.